Hi there friends, stop swiping Tinder with your dick for a second and get ready to learn something useful. I’m sure you all remember reading Iliad in school or at least seeing Eric Bana’s dumbest movie haircut ever. 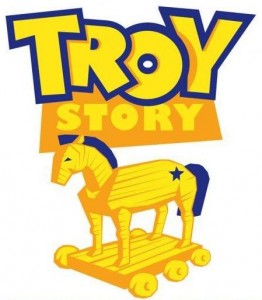 That’s right, it’s time for History Explained and this time we will reveal the truth about Troy. And if the first thing you thought of when you saw Troy was Zac Efron in High School Musical, please close the browser, turn off the computer and jump off the nearest mountain cliff. Today we are learning about Troy – the legendary Greek city which thousands of men killed each other trying to capture for 10 years straight because of some really hot chick named Helen.

There you go guys. If you don’t feel sufficiently shocked, go google ‘Shia LaBeouf’s Rattail’. Make sure to come back for the next edition of History explained when I will discuss my own history and share 5 random childhood photos of my penis.