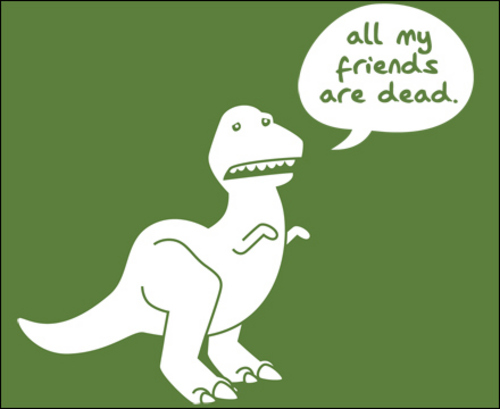 Hey guys, remember that time when you were 6, you stayed up all night to watch Rocky 3, peed in the ficus flowerpot because you were scared to go all the way through the dark corridor to the bathroom and had a tiny hard-on when you heard Velociraptor? Yes, those were the days when you knew the breeding and nutritional habits, average life-span and classification of 89 different types of dinosaurs but still wasn’t exactly sure what your dad did for living. Actually, I might need to call him to clarify this… Maybe it is time to go back in time but not to your childhood days but even further back. This is History Explained and today’s topic is the mighty reptiles – The Dinosaurs.

We will again explain 5 random facts about dinosaurs. Kicking off our list with:

1. Isn’t it funny how people often have misconceptions and are wrongfully influenced by stereotypes? In the case of the dinosaurs most people think they were all huge because of the well preserved fossils of the larger species. In fact there were many small dinos i.e. the Xixianykus was only 20 inches long which is as we know the average size of a black man’s dick. Also as all dinosaurs (and black men’s cocks) this tiny fellow always stood erect.

2. There are many theories regarding the extinction of dinosaurs. Some scientists say it may have been due to a change in the composition of Earth’s atmosphere and the reduction of oxygen. Take a deep breath and say that again, stupid! That’s just silly! I mean the dinos were huge. Jeez, they could hold their breath for a while, don’t you think? Plus dinos were so strong and stuff, remember Jurassic Park? Spielberg is never wrong about stuff like that.

3. The main theory regarding the extinction is of course the impact theory suggesting the impact of modern pop music or a huge meteorite hitting Earth. This makes sense since dinos didn’t have Bruce Willis to drill a hole on the asteroid to an Aerosmith tune and also T-Rexes had small hands so they couldn’t dig holes in the ground to hide, eat tuna fish cans and play bridge for two years. Other theories include alien abductions for sex experiments, drugs which also lead to the extinction of creatures such as Kurt Cobain, Anna Nicole Smith and Amy Winehouse, lactose intolerance, stock exchange fluctuations and also death from exhaustion from building the pyramids.

4. Skeletons and dinosaurs are actually not the same things. Although most dinosaurs include skeletons, skeletons generally don’t include dinosaurs. So next time you go to the Natural History Museum remember there were beautiful and happy dinos there before the evil former natzi paleontologists decided to throw away all the skin, muscles and vital organs and in a sick fashion display only the horrific bones.

5. It turns out dinosaurs are not extinct! Birds are actually the sole surviving lineage of dinosaurs. Larry King and Nessie from Loch Ness both disagree.

That’s all for tonight. Now pull your pants back up, you nerds, and stop breathing heavily. Although the 90’s are over and the streets are infested with Marvel-movies-brainwashed kids, dinosaurs will never be forgotten. Brace yourselves, the Jurassic World movie is up next year!